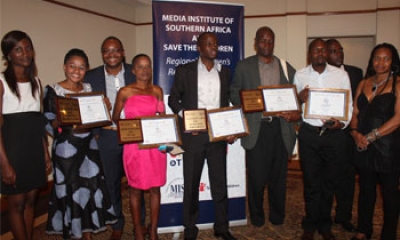 4 DECEMBER 2013, WINDHOEK, NAMIBIA – On Friday 29 November 2013, the Media Institute of Southern Africa (MISA) and Save the Children International announced this year’s winners of the Regional Children’s Reporting Awards, during a ceremony held at the Taj Pamodzi hotel in Lusaka, Zambia.

The Minister for Information and Broadcasting Services, Mwansa Kapeya, presented the awards and used the occasion to urge media to highlight successes and positive stories about youth development, instead of only presenting children as victims.

The award for best Print Feature was awarded to Bobby Kabango of Malawi, for his investigative piece, Marriages keep Balaka girls out of school, which was published in Malawian newspaper, Nation on Sunday.  The judges were impressed with the journalist’s efforts to represent all the relevant voices in this story and to present an element of hope and triumph as the main subject stood up against her community and showed a commitment to her education.

Malawi also picked up the Radio Documentary award, which went to Chikondi Mphande for her story titled, Culture compromising children’s right to education.  One of the adjudicators, Mr Mbongeni Mbingo, said the judging panel was impressed by this professional, engaging and informed documentary where all voices were considered. “The documentary presented the real problem and its serious impact on both the community and the nation as a whole; showed how the problem was being tackled; and presented solutions” he said.

The award in the category of Print News went to Sithembile Hlatshwayo of Swaziland, for her story, 15-year-old virgin discovers he is HIV+, appearing in the Times of Swaziland. The judges were impressed by the range of voices represented, that the boy’s privacy was respected by not revealing his identity through a photo and that the journalist showed how the teenager triumphed, in adversity.

The final award, in the category of Photography, went to Wallace Mawire from Zimbabwe for his photo essay titled, Social Cohesion: integrating children living with albinism into society.  The photo essay, which was published in Zambabwean publications, The Afronews, Daily news and Chaminuka News, depicted children living with albinism.  The judges were impressed with the journalists’ choice to use this visual medium to illuminate this issue.

Speaking at the ceremony, MISA Zambia vice-chairperson Hellen Mwale said the judging panel was pleased to note an increase in the number of journalists reporting on children’s successes this year, which was shown by the increase in entries from last year.  She said she hoped to see even more entries for next year’s awards and more examples of responsible and inclusive reporting on children’s rights and issues throughout 2014.

MISA and Save the Children also presented Zambian private television station, MUVI TV with a certificate of recognition. The certificate was in recognition of the work that the media house is doing in mainstreaming children’s reportage and also involving children in the actual production of the programmes. Journalists from the region and members of MISA toured the studio the afternoon before the awards.

The awards are part of a broader project, implemented jointly by MISA and Save the Children International, to create opportunities and safe spaces for the production of children’s media; the sensitisation of journalists on child rights; the development of codes of ethics for reporting of children’s issues and rights; and the promotion of fair, honest and accurate reporting on the experience of childhood.  “MISA found it befitting to undertake this project because it is convinced that participation is a key to the development and survival of any person, including a child,” said Ms Mwale.

Children and the media coordinator