Imperative need to genuinely free the airwaves in Zimbabwe 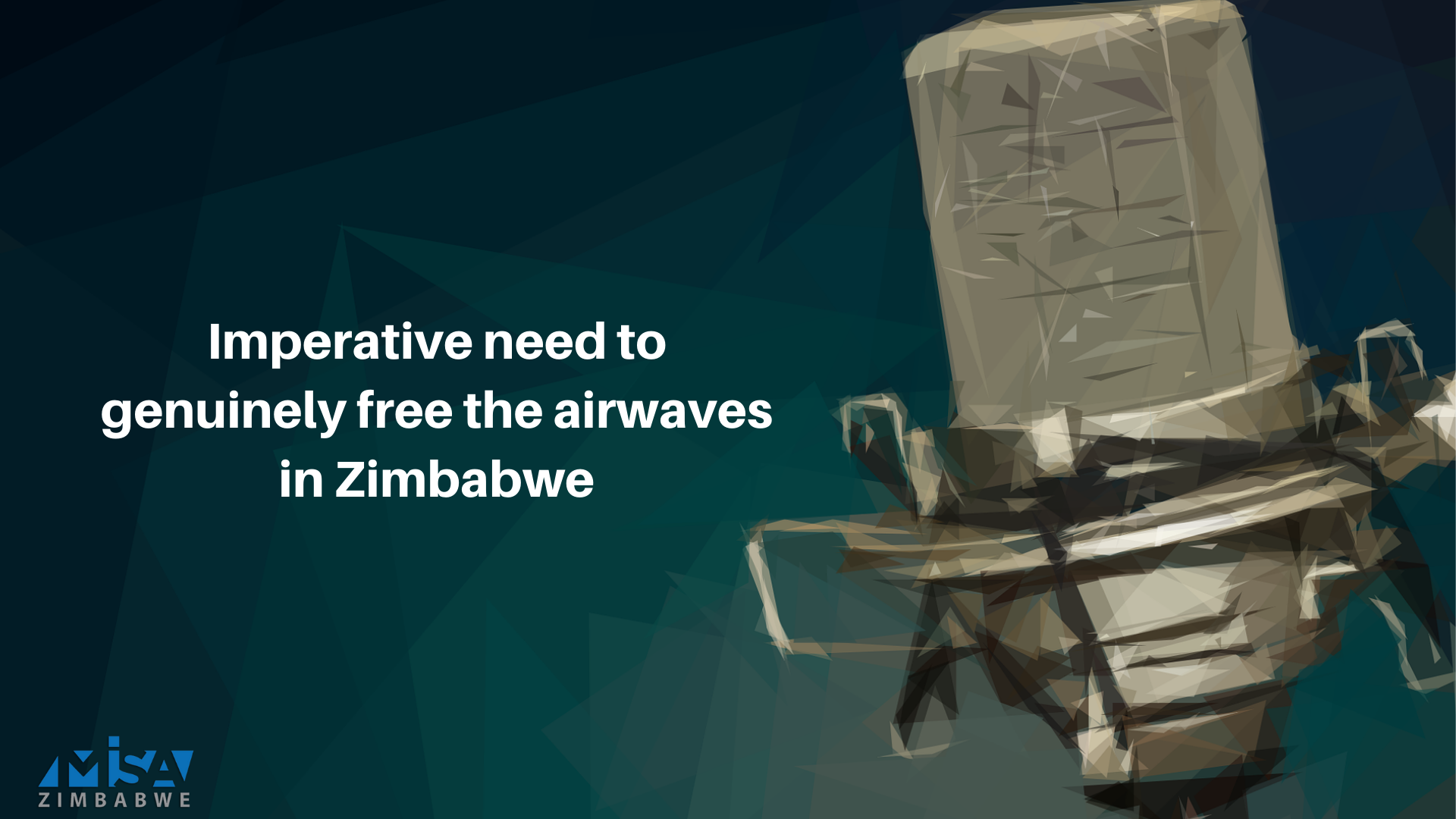 MISA Zimbabwe notes that Zimbabwe had gone for almost 40 years without community radio stations and privately owned commercial television stations until this recent call for applications for the respective licences.

This development, therefore, calls for the government of Zimbabwe to be sincere and genuine in liberalising the country’s broadcasting services.

The call for the outlined broadcasting services should thus be understood in the broader context of the ongoing media law and policy reforms. While the government continues to reiterate its commitment to implement fundamental reforms since President Emmerson Mnangagwa’s ascendency into office, the quality of the reforms still leaves a lot to be desired.

Of paramount importance is the fact that the proposed Broadcasting Services Amendment Bill which is still to be gazetted, limits foreign direct investment to 20% in the broadcasting industry. It further makes a bold statement that the broadcasting services in Zimbabwe are indigenised.

Given the capital intensive nature of the industry and the exorbitant licensing fees, the elite with their deep pockets will most likely continue dominating the industry. It is MISA Zimbabwe’s well-considered view that it is literally impossible, in our current economic environment, to raise investment capital for broadcasting without stimulus support from the investment markets. Presently, the broadcasting industry is owned and controlled by the ruling elite at national and provincial commercial levels.

It is therefore very likely that the very same voices already dominating the industry, are going to diversify into the television services industry while the rest of prospective broadcasters are crippled by the law from accessing foreign direct investment in addition to the exorbitant fees.

Government licensing itself to broadcast at community levels

At a stakeholder consultative meeting at Pandari Lodge in Harare on 7 – 8 December 2018, the Ministry of Information Publicity and Broadcasting Services’ Permanent Secretary Nick Mangwana, hinted that the government was going to licence 10 government-owned community radio stations and that funding for them had already been secured.

The same arguments he raised at the meeting that the licensing criteria would be geographic, seems to hold true following the call for applications by BAZ and seemingly points to a government that is also stampeding for the same space with prospective community broadcasters.

In terms of the official interbank rates, interested communities will need to part with US$2,000 for them to meet the statutory obligations. This notwithstanding, they will still need to procure and secure equipment, studio and office space, recruit personnel as well as meet production costs.

It is for these reasons that the government will then justify why it will be funding and owning the community radio stations, which according to the Permanent Secretary, have a budget of $92,000 each.

Again, the government will be applying a complex mix of the law and the costs to justify its approach towards owning the community radio stations. Accordingly, the proposed Bill, outlaws donations towards the proliferation of community radio stations. Yet, the costs as outlined under Statutory Instrument 27/20, are far beyond the reach of communities. This is divorced from regional best practices.

In Zambia, next door, they do not outlaw donations towards the establishment and sustenance of community media. In fact, they ensure that their Broadcasting Services Fund services the development of the community radio stations rather than using technical procedures to justify government having to license itself for the same.

The government, therefore, seems to be keen on taking the route of decentralising the Zimbabwe Broadcasting Corporation (ZBC) through establishing ‘community radios’. In essence, the community radios in question would actually be utilising ZBC infrastructure in the identified areas. As such, the argument by the government that it will be interested in preserving community languages entails that National FM, the ZBC languages station, would be at the centre of content generation.

It is within this scope that MISA Zimbabwe calls for the government to be holistic in the review of the media laws, and genuine in the liberalisation of the industry to strengthen competition, which improves the quality of the programmes and support towards the development of the content generation industry.

Further, the government should not be seen to be using licensing fees as a technical barrier to enter the industry. The law and the fees should in actual fact be aimed at promoting the constitutional provisions that guarantee freedom of establishment as articulated under Section 61 (3: Broadcasting and other electronic media of communication have freedom of establishment, subject only to State licensing procedures that –

The licensing fees as gazetted, inhibit the right to establish as they are beyond the reach of many, especially in the areas of content creation and aggregation and community broadcasting.

As already noted, the government, hopefully, will not use the cost of establishment as justification to register its own community radio stations and cracking down on online content creators.

Furthermore, the government has no business in owning community radio stations, while the limiting of foreign investment to 20% smacks of an attempt to ring-fence the ruling elite monopoly in the industry.

Freedom of expression environment deteriorates as Tanzania heads for elections