Statement from the MISA Election Observer Mission in Botswana 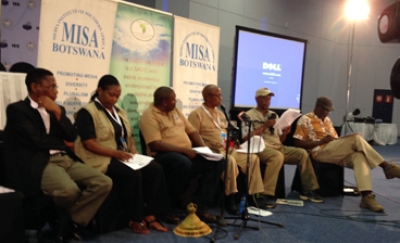 In October 2014, the Media Institute of Southern Africa (MISA) convened a mission to observe the conduct of the media and electoral bodies during the Botswana 2014 parliamentary and local government elections, held on Friday 24 October. The mission found that the media performed exceptionally well, though there could be improvements.

THE MEDIA AND ELECTIONS

Credible and fair elections are an essential element of democratic societies. During electoral periods the media play a particularly vital role, as they are the main source of information for the population, not only about the technicalities of registration, voting and the counting of ballots but also about the performance of the Electoral Management Body (EMB), the government and the actions, intentions and policies of all political players. The media’s job is to facilitate a transparent process, give space to the diversity of opinions and perspectives, and provide necessary background, context and analysis.

In 2012, in preparation for elections in southern Africa, MISA convened southern African journalists and Electoral Management Bodies (EMBs) to develop regional guidelines for media coverage of elections in southern Africa. In addition, MISA facilitated platforms for media and EMBs to share their respective communication and information needs, and to discuss concrete proposals to improve communication between EMBs and the media. MISA followed up these initiatives with practical training for Botswana journalists in 2014 on the legal framework for elections, journalism ethics and professionalism.

In its capacity building efforts on this issue, MISA is guided by the:

·      The Windhoek Declaration on Promoting an Independent and Pluralistic African Press (1991);

·      The Declaration of Principles on Freedom of Expression in Africa, adopted by formal resolution by the African Commission on Human and Peoples’ Rights (2002);

·      Guidelines Principles for Broadcast Coverage of Election in the SADC Region (2005);

Based on pre-election monitoring and assessment of the conduct of the media during the 2014 Botswana parliamentary and local government elections, MISA notes the following:

The Botswana media can be commended for an exceptional effort to facilitate voter education and expand the reach of its reporting. The most remote constituencies including Okavango, Chobe and Kalahari were covered during the election, and further effort was made to give voice to citizens whose opinions are rarely included in national policy making processes. This created balance and diversity in coverage, some of the tenants of good election reporting.

However, taking into consideration that public service media, which are funded through public resources, have a particular mandate in ensuring fair and thorough coverage of elections through equitable distribution of airtime to political parties and candidates, MISA is concerned about the uneven reportage towards the ruling party. Such media should be both fair and seen to be fair.

The arrest of Sunday Standard editor, Outsa Mokone on 8 September 2014, whilst not directly related to media coverage of the 2014 elections, undoubtedly caused a chilling effect on the media. More particularly it spelt the first time that sedition laws were used against journalists in Botswana. Sedition laws, by their very nature, are designed to extinguish freedom of expression. Reporter Edgar Tsimane, who wrote the story that led to Mokone’s arrest, remains in exile in South Africa. No doubt these developments have instilled fear and censorship amongst journalists.

Both the media and political parties made effective use of social media during the campaign period. However, the media is cautioned that whilst opinion polls are an important element in election coverage  – they provide one way of determining public attitudes toward issues, candidates and parties  – effort should be made to abide by ethical guidelines particularly the Guidelines in Media Coverage of Elections in the SADC Region. In reporting opinion polls, media need to reveal which party, individual or organisation commissioned and paid for the poll, the purposes of the poll, the identity of the polling organisation and its expertise in polling, the nature of the questions or issues the poll focused on, the geographic coverage an demographic profile of those who were polled, the methodologies used in polling including details of the sample and the margin of error which will contextualise the poll results.

Based on the findings, the MISA team recommends as follows:

·      The Independent Electoral Commission (IEC) of Botswana missed an opportunity to work with the media to intensify voter education. This would have averted some of the challenges experienced by voters on election day. For example, a large number of spoilt votes were recorded in a number of constituencies, as well as the time taken for actual casting of the ballot. Thus, The IEC of Botswana should in future elections consult with the media about the processes it intends to follow and arrive at an agreement.

·      The Government of Botswana should amend the Botswana Communications Regulatory Act (BOCRA) of 2013 to provide for a three-tier system of broadcasting, in line with the Declaration of Principles on Freedom of Expression of the African Commission for Human and Peoples’ Rights (2002) and the African Charter on Broadcasting (2001). Specifically, article VI of the Declaration emphasizes that state and government controlled broadcasters should be transformed into public service broadcasters, accountable to the public through the legislature rather than the government;

·      Through the authority of the (BOCRA) Act, there should be provision for media conduct during election time, specifically the equitable distribution of air time to political parties and candidates during the election campaign period;

·      The Government of Botswana has not harnessed the power of community radio to facilitate communication between communities on issues that affect their lives. Botswana is one of the few countries in southern Africa that does not licence community radio station. Thus, MISA recommends that the BOCRA Act of 2013 be amended to provide for a licencing regime for community broadcasting, to facilitate communication between communities and their policy makers, and thus further manifest the right to freedom of expression, which is enshrined in the Constitution of Botswana;

·      The Government of Botswana and its citizens would benefit from enacting an access to information law. Access to election-related information is essential to the integrity of electoral processes in the democratic world;

·      MISA and other media organisations should be encouraged to set up training programmes for their staff and members and promote the principles of ethical conduct and fair, accurate and balanced coverage of election news and party political manifestos.

·      The media should further familiarize themselves with the ethical and professional principles outlined in the Guidelines in Media Coverage of Elections in the SADC Region.

The Media Institute of Southern Africa (MISA) is a non-governmental organisation with members in 11 of the Southern Africa Development Community (SADC) countries. Officially launched in September 1992, MISA focuses primarily on the need to promote free, independent and pluralistic media, as envisaged in the 1991 Windhoek Declaration. MISA seeks to play a leading role in creating an environment of media freedom and free expression that promotes independence, pluralism and diversity of views and opinions, media sustainability, competency and professionalism in the southern African region. MISA further aims to create an environment in which civil society beyond the media sector is empowered to claim information and access to it as inalienable rights and in which the resultant freer information flow strengthens democracy by enabling more informed citizen participation.

Journalists safety and access to information crucial to SADC elections