In the report, RSF said the rankings showed that the page had not been turned from the late former President Robert Mugabe’s era. The report, however, also notes some positive developments.

RSF noted that on assumption of office, President Emmerson Mnangagwa promised to reinforce the pillars of democracy including the media, which were harassed and gagged for 37 years under Mugabe.

“However, Mnangagwa was notorious for suppressing dissent when he was national security minister and his first steps with regard to press freedom have been marked more by promises than anything like the concrete progress for which that journalists had hoped,” RSF say.

On the positives, RSF said access to information has improved and self-censorship has declined, but journalists are still often attacked or arrested.

“The blocking of social media at the start of 2019, when major protests against a fuel price hike were being organised, shows that the regime has not renounced the use of cyber-censorship to prevent information from circulating,” the report said.

“Hopes of journalistic renewal were further dampened in 2020 when Zimbabwe positioned itself between Nigeria and Uganda on the podium of Africa’s most repressive countries with regard to the coverage of the coronavirus crisis.”

The report noted the arrest of Hopewell Chin’ono, the journalist who played a role in exposing corruption in the procurement of COVID-19 equipment.

RSF noted that Chin’ono’s arrest and detention was a glaring symbol of the government’s failure to turn the page on the years-long predatory behaviour towards press freedom.

It further said the security apparatus has not yet lost the habit of harassing journalists and acts of intimidation, verbal attacks and confiscation of equipment are all still standard practice.

“Extremely harsh media laws are still in effect and, when new laws have been adopted, their provisions are just as draconian as those they replaced,” RSF said.

“Journalists are worried about a cyber-crime bill that is being drafted because it would allow the security apparatus to legally spy on private conversations.

“The army chief’s reference to social media as a “threat to national security” has reinforced their fears.”

A year ago, the Zimbabwe National Army (ZNA) Commander Lieutenant-General Edzai Chimonyo, said the military would soon start snooping into private communications between private citizens to “guard against subversion”.

While RSF noted that new broadcasting licences had been awarded, it noted that there was a lack of diversity in the granting of the permits.

Furthermore, the report noted that the new TV licence holders were linked to military officers and the ruling party.

Namibia is the best-ranked country in Africa, ranking 24th worldwide.

Eswatini and the Democratic Republic of Congo are ranked 141st and 149th, respectively.

MISA Zimbabwe position
The year 2020 saw a massive escalation of media freedom violations, with 52 journalists either arrested, detained, harassed or assaulted that year in Zimbabwe.

However, MISA Zimbabwe notes that there have been some improvements in the media law environment such as the repeal of the Access to Information and Protection of Privacy Act and the enactment of the Freedom of Information Act.

Meanwhile, proposed laws such as the Cybersecurity and Data Protection Bill have some clawback provisions that need to be addressed as they have the effect of reversing the progress that has been made so far.

MISA Zimbabwe calls on the government to use the RSF report and other reports produced by MISA Zimbabwe such as the Southern Africa Press Freedom Report to improve and strengthen the media policy and regulatory framework.

Thumbs up for Parliament Portfolio Committee on Information!

Freedom of expression and of the media in Southern Africa: Letter to SADC

Hit or Miss? Assessing the Digital Platform for the Safety of Journalists in Africa

Upcoming event: Webinar on Media Law: The journalist's professional license in Mozambique. The webinar is scheduled for 16 September 2021. Meeting details are in the poster. 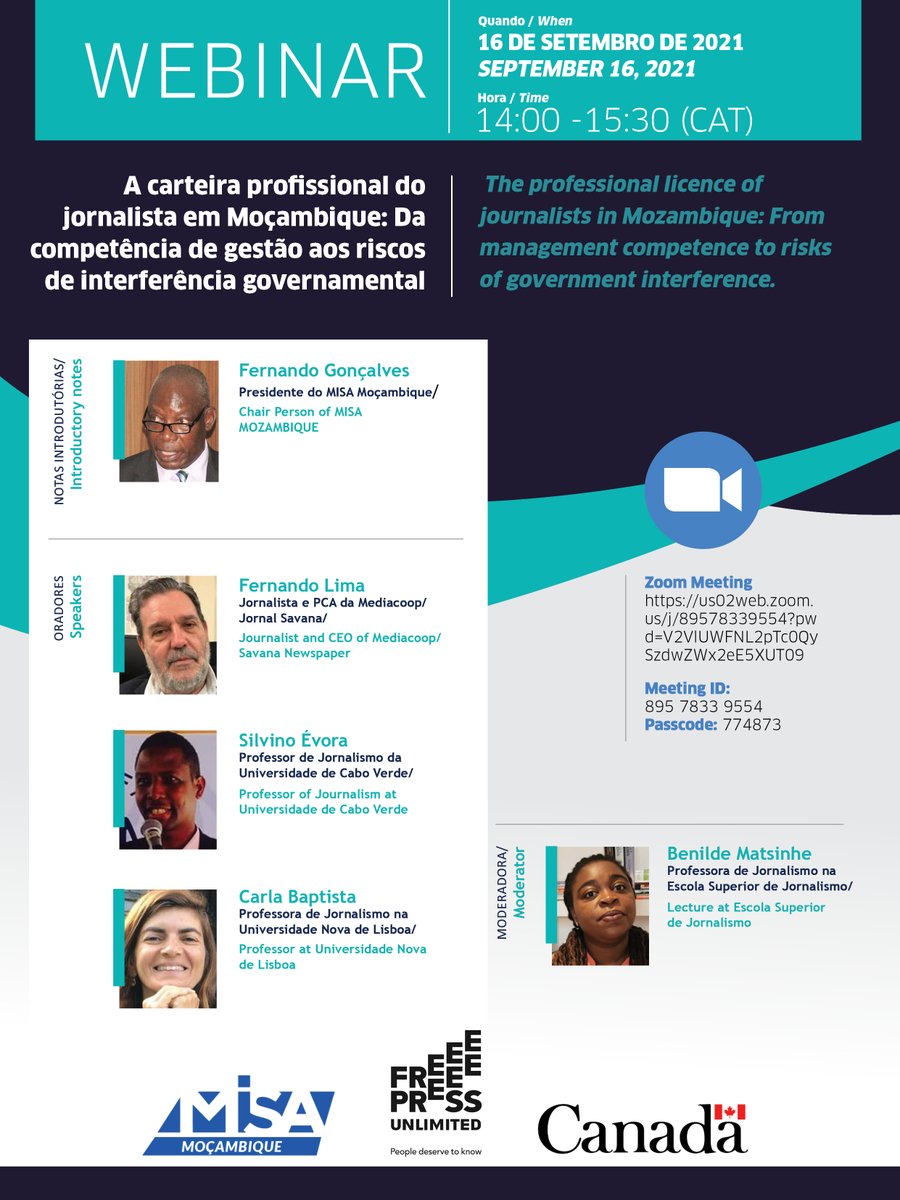